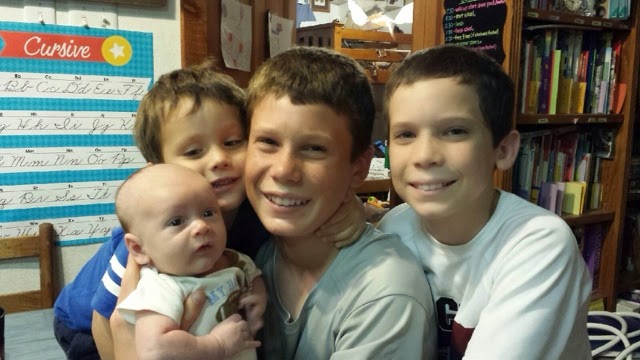 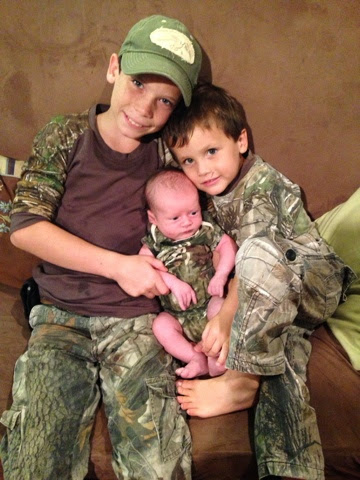 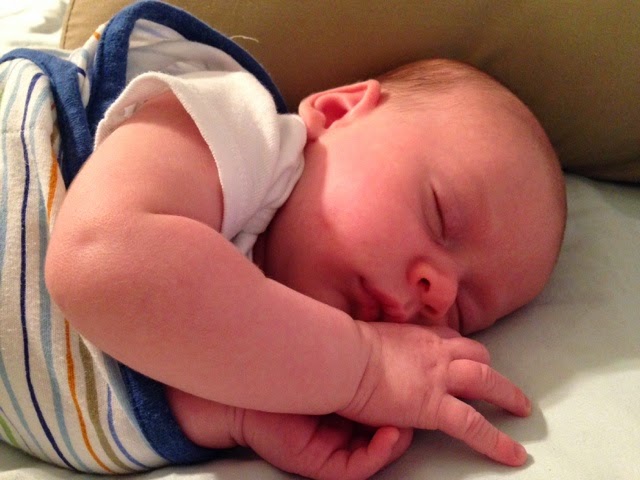 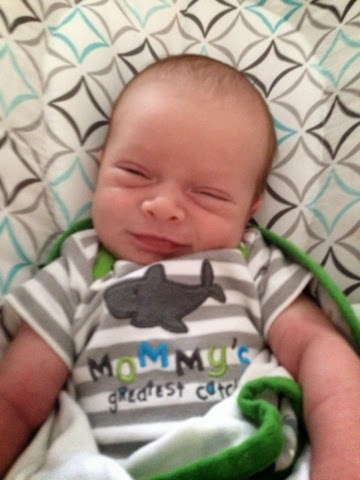 Baby Jake is growing quickly and doing well. At 6 weeks he is over 11lbs and grown more than 3 inches already.
He was born with lots of hair mainly on the back of his head but now has lost all of the hair on top and none on the back. He is sporting an old man chrome dome.  We lovingly call him "baldy" and "hiccob" (because he has A LOT of hiccups). You can see the difference best between the first and last pictures, the first being the most recent.
He is a good sleeper sleeping 5 hour stretches from the day he was born, although lately he grunts and groans so much during the night that I'm not sure how long he sleeping. I only know I am not sleeping much during his nightly performances.
We recently discovered that with so many loving hands to hold him, Jake was rarely getting decent sleep during the day and becoming pretty cranky. We are now working on how not to touch or kiss the sleeping baby so mama doesn't get stuck with a fussy baby every evening after all her helpers go to sleep 😉.
We are almost sure he smiled at us today, while awake. Melted our hearts. This is when it starts to get fun having a baby.  When they interact with you and bring a happiness to your life that can't be replaced.
I am still trying to grasp the idea of being a mother to FOUR boys.  It's sinking in very slowly. I love the top picture of all four of them together.  It reminds me of who I need to be for them.  Strong, yet tender; stern, yet fun at times. My role is not the same for them as it is for my girls. I'm seeing this so much more now that we have a teenager. Moms are very important in a boys life while they are young but they hit a point where it's time to let go of the reins and let them lead, mess up, and figure things out, within boundaries.  Even more, it's a shift where dad's role really steps up and mom has to back down. It's hard, but I love watching it all unfold slowly.  So back to Jake, we will gladly repeat the process all over again with him, as well as the other two boys.
I have discovered the secret every mother of a newborn should have: an eight year old girl. Wow!  How did I do it all by myself before?  Claire is eight, almost nine, and so happy to have a real live baby doll. She changes his diapers, bathes him, dresses him, burps him, holds him, gets him in and out of his car seat, packs the diaper bag; you name it, she does it. It's a good thing I nurse him because otherwise I would never get to hold him.  Our other kids are also amazing helpers. It has really made having another baby so easy.
I am so thankful for this precious baby. I do not take for granted one moment how blessed we are to have him with us. The things we took for granted before with a baby, like their health, their vision and hearing, a functioning mouth to nurse correctly, rem-sleep smiles, all of the normal everyday occurrences, are like precious jewels to us now.  The oohs and aahs ring out in our home with every little thing Jake does. I remember fondly how amazed I was the moment he first opened his eyes at birth. It was precious to feel so thankful for something as simple as a baby's eyes opening.
We are so blessed to get to have him although we know he, and all our children, are just on loan temporarily from The Lord. We will try to do our best to raise them to be godly adults.
Posted by Gabrielle at 4:07 PM

Your comment is awaiting moderation. Thanks for your patience!

Babies are a Blessing

The greatest of these is LOVE

Gabrielle
My heart is in my home, the place where I feel the Lord would have me be. I am blessed to be beside my husband, raising our 6+ children, homeschooling, and caring for our home. It isn't always easy & I'm not always joyful, but there's no other place i'd like to be. Join me as the Lord daily strengthens and renews my joyful heart at home. Check back often or subscribe below to have posts emailed to you. blessings~

The Joy of the Lord is my strength~